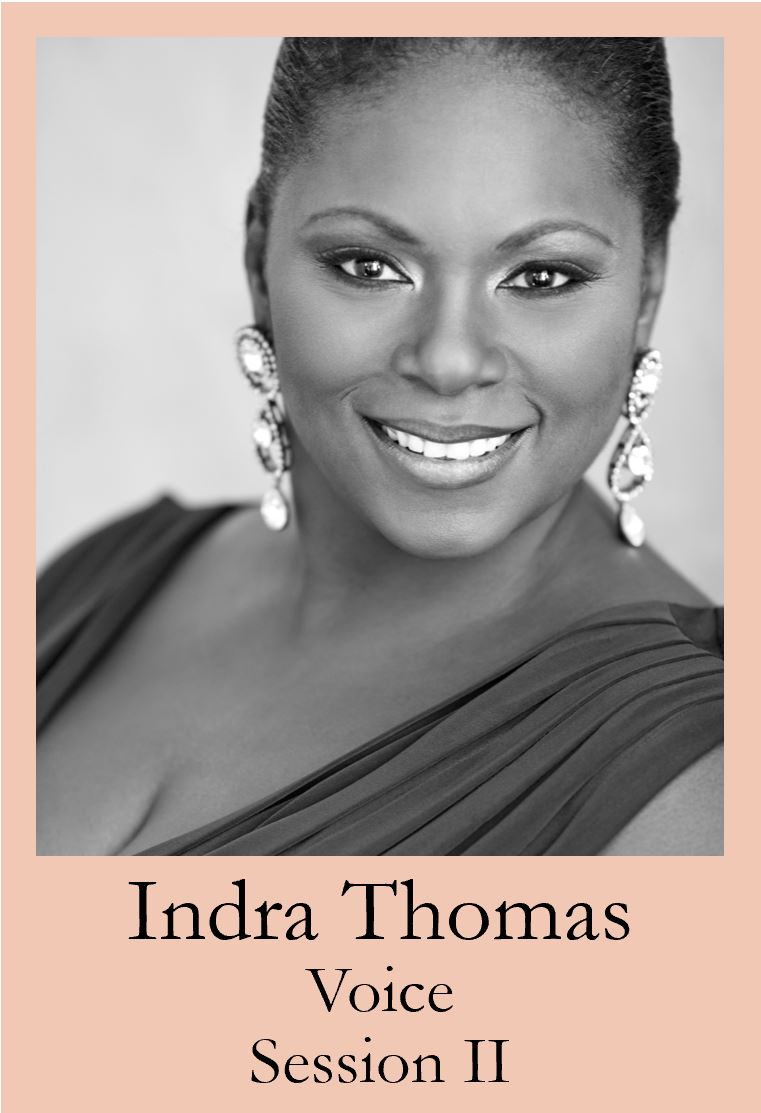 Indra Thomas has established herself as an artist of incredible sensitivity, poise, and virtuosity.

In the 2019-2020 season, Ms. Thomas will perform with the Cambridge Symphony Orchestra in their Beethoven’s 9th Symphony and the Atlanta Opera production of Porgy and Bess in the role of Serena.

A native of Atlanta, Georgia, Ms. Thomas is a graduate Shorter College in Rome and the prestigious Academy of Vocal Arts in Philadelphia. She is a Visiting Professor of Voice and the Director of Opera at her alma mater Shorter University.

Ms. Thomas’ 2018-2019 season she returns to Carnegie Hall with the Music For Life International Orchestra on their humanitarian concert Beethoven for Rohingya with Beethoven’s 9th Symphony; joined Cincinnati Opera Festival in their production Porgy and Bess as Serena.

Ms. Thomas’ 2017-2018 season included performances of the Metropolitan Opera in their production of Elektra, joins the North Carolina Symphony for their “Swing in the New Year with Gershwin” concert, and performs Verdi’s Requiem with the Ann Arbor Symphony. She returned to the Harare International Festival of the Arts (HIFA) in Harare, Zimbabwe, Africa for their Opera Night Concert; and play the role of Serena in Spoleto Festival USA’s lauded production of Porgy and Bess.

Ms. Thomas’ 2015-2016 season also included a performance with the American Harp Society; Mahler’s 2nd Symphony with the Music for Life International Orchestra on their humanitarian concert Mahler for Vision at Carnegie Hall and Opera concert at the Harare International Festival of the Arts (HIFA) in Harare, Zimbabwe, Africa.

Ms. Thomas’ 2014-2015 season included performances with the New West Symphony in California (Bachianas Brasileiras No.5), Flint Symphony in Michigan (Britten War Requiem). The 2013-2014 season brought appearances as a soloist with the Orquesta Filarmónica de Bogotá in Britten’s War Requiem and a return to the role of Aida with Bob Jones University.

During the 2012-2013 season, the soprano appeared in concert at Un Violon sur le Sable in Royan, France; joined tenor Joseph Calleja for a program of arias and duets at Royal Festival Hall in London; performed recitals at Seattle University (Washington), and Agnes Scott College (Georgia); appeared with Arizona Opera for Leonora in Il trovatore, and returned to the Flint Symphony for a concert of music by Samuel Barber. During summer 2013, she debuted the role of Senta in Der Fliegende Holländer with the Princeton Festival.

Engagements in 2011-2012 included a return to the Hamburg State Opera for Aida, further performances of Aida at London’s Royal Albert Hall, and Knoxville: Summer of 1915 with the Florida Orchestra Symphony.

In the 2010-2011 season, Ms. Thomas performed a Gala Concert with the Artist Series of Sarasota, a recital at Weill Hall (Carnegie Hall) in New York, and the Verdi Requiem with the Flint Symphony. Internationally, she sang the title role in Aida with Palau de les Arts in Valencia, Spain, and Choregies d’Orange in Orange, France. She also appeared at the Mozart Festival La Coruña in Spain for Chausson’s Poémes de l’amour et de la mer.

Engagements in the 2009-10 season included performances of the Verdi Requiem in a tour of four cities in Spain with the Euskadi Orchestra under the direction of Andres Orozco Estrada, Britten’s War Requiem with the Orchestra de Paris, and the title role in Aida at the Avignon and Bregenz Music Festivals, respectively. Engagements in the United States included a Christmas concert with Little Orchestra Society of New York, the Verdi Requiem with the Vermont Symphony, and a last-minute performance in the title role of Aida with the Atlanta Opera.

During the 2008-09 season, Ms. Thomas made her debut at the Teatro Real in Madrid and the Wiener Staatsoper, as Amelia in Un ballo in maschera. In addition, she sang performances of the Beethoven Symphony No. 9 with the Seoul Philharmonic Orchestra in South Korea, and a concert of opera arias with the Cleveland Orchestra.

In the 2007-08 season, Ms. Thomas performed opposite Roberto Alagna in the world premiere of Le Dernier Jour d’un Condamné by David Alagna at the Théâtre des Champs Élysées, and sang the Porgy and Bess Suite with the Gewandhaus Orchester under the direction of Riccardo Chailly. She made her debut at the Teatro del Maggio Musicale Fiorentino as Amelia in Un ballo in maschera, sang the Verdi Requiem with the Detroit Symphony and the Kansas City Symphony and starred in a gala concert celebrating the 60th Anniversary of The Little Orchestra Society of New York in Town Hall. Ms. Thomas sang Sir Michael Tippett’s A Child of our Time with the London Symphony Orchestra under the direction of Sir Colin Davis. This performance was recorded and released on the LSO Live label and nominated for a 2009 Grammy Award in the “Best Choral Performance” category. She also performed Aida with the Gran Teatre del Liceu in Barcelona, and made her debuts with Opera Africa in Johannesburg and at the San Diego Opera in this role.

Additional performances of note include Il trovatore with Austin Lyric Opera; Spanish debut in the Verdi Requiem under the direction of Jesus Lopez-Cobos in a gala performance; and a Boston Symphony debut in Tippett’s A Child of Our Time with Sir Colin Davis conducting. As well: her New York Philharmonic debut in the Porgy and Bess Suite conducted by Lorin Maazel and nationally televised on Live from Lincoln Center (2003 Emmy nomination); Knoxville: Summer of 1915 with the Philadelphia Orchestra; Liu in Turandot at the Metropolitan Opera, Ms. Thomas’ debut at the Lyric Opera of Chicago in Aida; and Elisabeth in Don Carlos with Boston Lyric Opera and Minnesota Opera.

Ms. Thomas’ movie credits include the featured soloist in the second funeral scene of Academy Award winning movie Driving Miss Daisy (1989) and The Queen of the Night in The Upside (2019) with Kevin Hart and Brian Cranston.