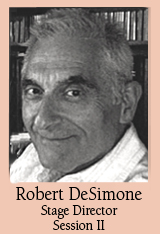 Robert’s arts administration posts include: Administrative Coordinator for the Music Center Opera Association Los Angeles, Director of the City of the Angels Opera, Executive Director for the Visual Arts Center of Alaska, Co-Director of the Accademia Vocale di Lucca in Italy, and the Artistic Director of Opera Panama.

A recipient of awards from the Adolph’s Foundation, National Thespian Society, Italian Government, National Association of Piano Teachers, Austin Circle of Theatres, National Association of Teachers of Singing. He has received special commendation for his work with contemporary opera and the operas of Giacomo Puccini and has been a judge for the Metropolitan Opera Auditions, the Butler Opera International Competition, and major international voice/opera competitions in Peru, Panama, Mexico and Europe. Robert has hosted the cablevision series “Encore,” and is an active lecturer and presents masterclasses in opera.