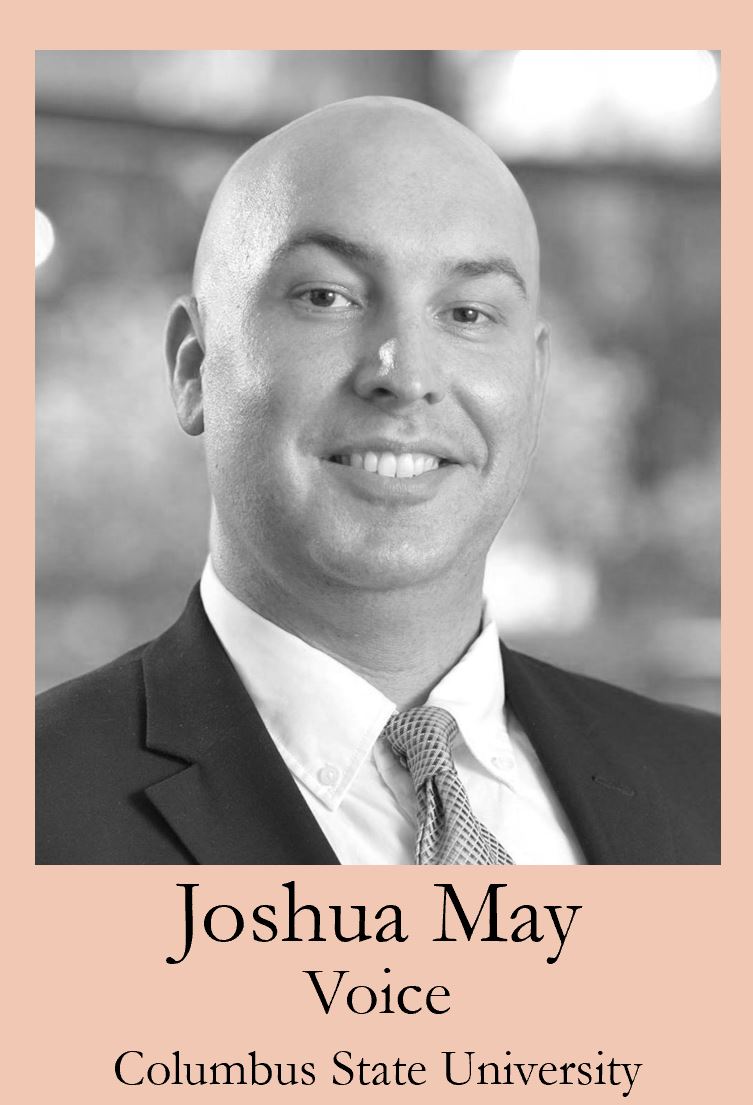 Dr. Joshua May, tenor, is an Assistant Professor of Voice and the Director of Opera Activities at the Schwob School of Music at Columbus State University.

He has performed and premiered works throughout Europe, Canada, and the United States. He is an avid recitalist and oratorio singer, performing recently as a soloist in Bach’s Magnificat, Mozart’s Requiem, and Handel’s Messiah. In 2022, he will be premiering Jay Batzner’s song cycle, A Dream of Fabled Lands. He has performed over thirty diverse operatic roles that range from the Baroque repertoire to premiers of new works. He has performed such recent roles as Tamino in Mozart’s Die Zauberflöte, Male Chorus in Britten’s Rape of Lucretia, Rinuccio in Gianni Schicchi, and Ferrando in Mozart’s Così fan tutte.

As an opera director, his recent directing credits include mainstage and outreach productions of Pelléas et Mélisande, Die Zauberflöte, Rusalka, Amahl & the Night Visitors, Der Schauspieldirektor, Cendrillon, and The Light in the Piazza. He was selected as a national finalist for the Charles Nelson Reilly Prize for Stage Directors in both opera and musical theatre by the American Prize. Schwob Opera Theatre has also been a national finalist for NOA’s Collegiate Opera Scenes Competition under his direction. He was a resident artist with Pittsburgh Festival Opera, where served as an assistant director for their production of Wagner’s Die Walküre and as an associate director for a world premiere of an opera set to the life story and music of Puccini, Scandals. Dr. May has served as a faculty artist in the opera directing program with the Druid City Opera Workshop at the University of Alabama and as an opera directing fellow at the Hawaii Performing Arts Festival. This summer, he will join the faculties of Opera Viva! in Verona, Italy and the Festival of International Opera in Umbria, Italy.

He has presented his research with NOA, CMS, NATS, NVES, GMEA, AMEA, and the Lilly Conference. He currently serves NOA as the Governor for the Southeastern Region, is a current elected member for their board of directors, and is the Chair for the Student Programming Committee. He is also the current Vice-President for Georgia NATS. He has served as an active voice adjudicator, master clinician, and guest stage director across the nation. Dr. May has completed all three certification levels at the LoVetri Institute for Somatic Voicework. His voice students have won both national and international prizes, and they have been recipients of voice scholarships at the undergraduate and graduate levels in university music programs across the nation.